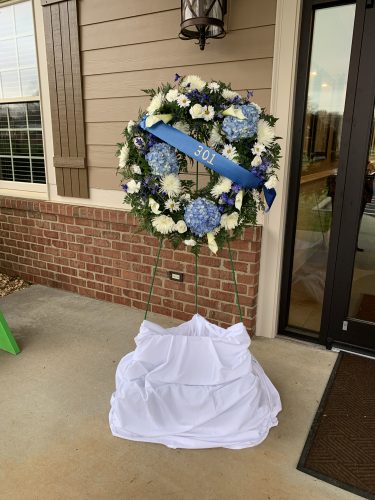 Funeral Services for Franklin Springs Police Chief John Thomas will be held Sunday at 3p at the Swails Center.

The family will receive friends at the Swails Center Sunday from 12:30 to 2:30p.

A floral wreath in front of City Hall was laid this week as a remembrance and flags at City Hall, the Fire and Police Department and even Emmanuel College are flying at half-staff.

Franklin Springs City employees are receiving counseling as they struggle to cope with the death of Police Chief John Thomas.

Franklin Springs Manager Lee Moore said Thursday City employees are trying hard to hold each other up through a very difficult time.

“It’s been a real somber, somber last few days,” he said. “Each one is handling this a little differently. You know, they’re showing just great strength, resolve, and compassion because it’s a very, very difficult situation for all of them and especially the family.”

Moore said he and City staff are especially grateful for the tremendous support they and Thomas’ family has received this past week.

“They’ve had counselors there every day. They’ve had ministers there every day; tremendous support for the community and surrounding counties. It’s just amazing the support that we have received and the mercies that God has put upon us during this difficult time. Without all the prayers and support that we have received and the family has received it would be even more difficult than what it currently is,” Moore said.

Thomas’ body was sent to the GBI Crime Lab in Atlanta for autopsy and Wednesday his body was brought back to Franklin Springs with a police escort.

Sheriff Steve Thomas tells WLHR News John Thomas had been in law enforcement in Franklin and Stephens Counties since 1994.

He also served as Chief of Police for the City of Canon and had at one time had been an EMT with the Franklin County EMS.

Chief Thomas leaves behind a wife and two children.