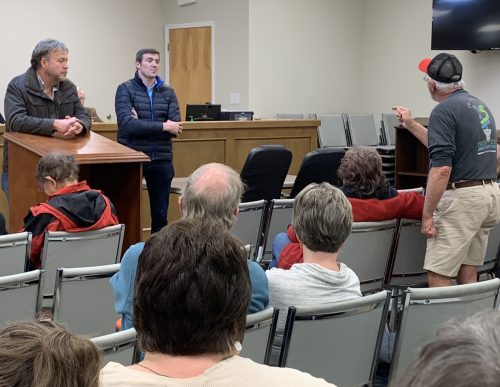 Franklin County Commissioners say they’ve heard enough complaints from citizens living around and near the Georgia Renewable Energy biofuel plant in the Double Churches Community; enough to cite the facility under the County’s Nuisance Ordinance.

At a called Board of Commissioners meeting Tuesday evening, the Board voted unanimously to pass a resolution ordering County Manager Beth Thomas to begin proceedings against the plant for violations of the County’s Nuisance Ordinance.

Commissioner Eddie Wester read the motion drawn up by the Board that states the issues with the biofuel plant on Highway 198 have now become a health and safety crisis.

“The Franklin County Board of Commissioners finds that the continual and ongoing noise levels and chemical emissions produced by the operation of the Georgia Renewable Power Plant located in Franklin County, Georgia, have created a public emergency where the health and safety of the residents in the immediate vicinity of the plant are in imminent danger,” Wester began.

“The Franklin County Board of Commissioners finds that an emergency condition exists where the dangerous noise levels and chemical emissions produced by the operation of the Georgia Renewable Power Plant located in Franklin County, Georgia, constitute a nuisance as defined in Section 18-6 of Chapter 18 of the Franklin County Code of Ordinances,” he continued.

“The Franklin County Board of Commissioners hereby refers this matter to the Franklin County Magistrate Court for further action as required in Chapter 18 of the Franklin County Code of Ordinances. The county manager is directed and authorized to begin proceedings in magistrate court and issue a notice of violation to Georgia Renewable Power that provides 30 days to achieve reasonable noise levels at or below 60-70 decibels at a two-mile radius around the plant at reasonable times of the day and a reduction in chemical emissions that have been deemed carcinogenic substances by the National Institute of Environmental Health Sciences to levels that are determined to be safe and non-harmful by that organization,” Wester concluded.

People attending the called meeting who live near the plant clapped after the motion was read.

After reading the resolution and before taking a vote, Commissioner Macomson noted that during all of the recent commission meetings, no GRP representative has come to address the Board of Commissioners or answer citizens’ complaints.

“For more than 15 years I’m told people have worked in County government to recruit GRP  to come to Franklin County. A lot of people worked to try and help make them a success. But since the beginning of their operation we’ve had nothing but grief,” Macomson stated. “Over the past four months we’ve listened to person after person after person stand up here and tell us how miserable their lives and quality of life has become since this plant started operating due to the noise produced, the chemical emissions produced and even water pollution.”

“Not one time in the last four months has any representative from GRP come before this Board, and these are open meetings, to address us or talk to the people who were here to complain and address their concerns, Macomson continued. “GRP is not operating in a manner they promised. They promised no noise. Then they said, ‘the noise will get better once we’re at full operational status.’ Then they said, ‘We’re going to monitor the sound. We’ve ordered a silencer. We hope to have it installed in a few weeks.’ But still there’s no end to these problems. We’ve been patient. I feel like the residents have been more than patient. What has GRP done? There’s no timeline. There’s no end in sight and there’s no promise from them that they’re going to do something about this problem and get it fixed within a specific time period,” he concluded.

Macomson also read a portion of a statement dated December 9, 2019 from by June Dean, Senior Director of Advocacy with the American Lung Association in Georgia.

Dean said in the statement that biomass for fuel is a known carcinogen, and emissions from such plants can cause a host of illnesses and death. (You can download the full statement from Dean by clicking on the link below.)

Macomson also noted GRP is months behind in paying their property taxes, which WLHR News has confirmed with the County Tax Commissioner.

McManus told the crowd Veolia has only recently gotten control of the plant now that the contractors have left, and he said the contractors left a lot things on their punch list not finished.

Grove added that they have ordered silencers to put on the valves causing the noise, which he said should arrive in three and half weeks from Canada.

Most attending Tuesday’s called meeting said it isn’t just the noise, it’s the pollution, the stench, and also a ground vibration coming from the plant that some said is so strong, it rattled the ornaments off their Christmas tree.

Grove said he wasn’t aware of any ground vibration.

The County has given GRP 30 days to comply with the nuisance ordinance and make the necessary changes.

12-3-19 Statement for Madison and Franklin Counties-converted