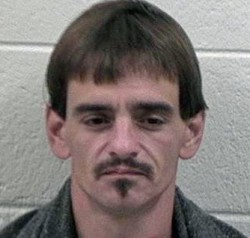 Jeffrey Arnold is wanted in Banks County for burglary

Banks County authorities are asking for the public’s help to locate a suspect invovled in a burglary.

It happened Sunday night at a home on Shady Grove Road.  According to Banks County Sheriff’s office spokesperson, deputy Carissa McFaddin, the suspect was caught leaving the home by the homeowner.

“The complainant advised there was an ongoing situation between her and Jeffrey Arnold,” McFaddin said. “When she arrived home she found Arnold running from the inside of her towards her.   He then began  striking one of her other vehicles that was on the property.”

McFaddin said the victim asked Arnold to leave, but he refused until deputies arrived on the scene.

McFaddin said when deputies arrived, Arnold fled on foot into some woods.  Deputies chased Arnold but it is believed he was able to get into a vehicle and escape capture.

McFaddin said Arnold is known to law enforcement from previous incidents and when caught, he faces a number of charges.

“We have secured a warrant for burglary in the first degree,” McFaddin said. “He is considered armed. Witnesses saw Arnold leave with an assault rifle that the complainant said was discovered missing from her home.”

41-year old Arnold is described as a white male, 5’9”, weighing 160lbs, with black  hair and a goatee. He is believed to be armed.