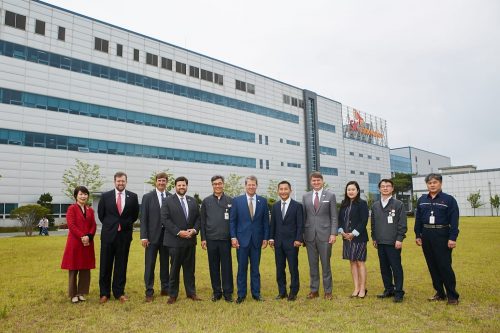 Last week, U.S. Representative Doug Collins called for an investigation into alleged illegal hiring practices on the part of South Korea-based SK Innovation in Commerce and one of their contractors.

The investigation came after an undercover report by reporter Randy Travis on Fox5 in Atlanta showing dozens of Korean and Malaysians be shuttled back and forth to the plant from surrounding neighborhoods.

Collins said he learned of the issue from both Customs and Border Protection (CBP) and constituents in Northeast Georgia, who complained to his office and the media.

On Thursday, Collins issued a statement after learning of the arrests.

“These arrests confirm what we suspected all along: for months, SK and their contractors have been engaged in an ongoing scheme to illegally employ Korean foreign nationals at their facility in Northeast Georgia,” Collins said. “These jobs were promised to hardworking Georgians, and SK’s illegal and immoral actions have been nothing but a betrayal to Georgia taxpayers who have invested heavily in SK’s development in our state. I want to thank ICE for acting swiftly in response to my calls to deport this illegal workforce and for their commitment to enforcing our immigration laws.”

The state of Georgia gave SK over $300 million in tax breaks, grants, and land to encourage them to bring their battery factory to the state. However, Collins said these arrests prove the jobs SK once promised for hardworking Georgians were instead being given to Korean foreign nationals.

In mid-August, Collins sent a letter to ICE and Customs and Border Protection (CBP) requesting a full investigation into SK’s ongoing scheme after Collins was contacted by a constituent who had observed firsthand Korean nationals illegally working at the facility.

One week later, Collins wrote a second letter to ICE and CBP urging swift action on the investigation into SK after Collins received new information on the company’s ongoing effort to illegally employ foreign nationals at their facility.

This came after Collins learned that local officials discovered over 200 Korean foreign nationals were training for on-the-job welding at a non-operational chicken farm just five miles from SK’s construction site.

Sign-ups for FCP’s “Stories and Songs of Christmas 2022”