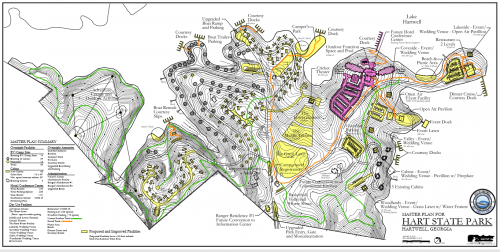 Work is moving ahead at the new Hartwell Lakeside Park.

At their City Council meeting last week, Mayor Brandon Johnson said the first phase of the redevelopment of the old Hart State Park is underway and going well.

Johnson said campsite developer Barry Stern has already hired seven locals and plans to hire another 20 by the end of the year.

Councilman Trey Hicks also noted the camping section of Hartwell Lakeside Park has now been accepted as a Kampsite of America i(KOA) campsite.

Johnson added the City has finalized its lease the U.S. Army Corps of Engineers, and after some back and forth with the County, has come up with its own version of an intergovernmental agreement with the County regarding annexing the park into the City.

“At the end of May, the County voted on an intergovernmental agreement. That was presented to the City and the City Council decided to table that for review. The discussions began amongst ourselves and Jon (Herschell) and we have forward with what we feel is a reasonable and multi-beneficial agreement for both the County and the City of Hartwell,” Johnson explained.

The County had requested as a condition of agreeing to the annexation that the City would not use the 60/40 annexation rule for 25 years. That rule would allow 60% of the citizens living around the park to request their properties be annexed into the City.

Johnson noted Hartwell has never used the 60/40 rule but said the City Council’s counter agreement upped that to 70/30 for the next 10 years.

“There’s another thing we’ve added in here. The 60/40 rule is what the State law allows. The City fo Hartwell is willing to go up to a 70/30 threshold, which would mean that instead of 60% of the landowners and voters, it would have to be 70%, raising the standard even higher. In theory, adding a 70% approval or more of an annexation request by the citizens being annexed,” the Mayor explained.

Hartwell’s City Attorney told the Council the county now has 90 days to respond to the City’s counter annexation intergovernmental agreement.