Truck Fire Backs Up Traffic on I-85 Thursday Morning 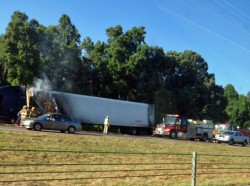 No word yet on what caused an 18-wheeler to catch fire on I-85 Thursday morning.

It happened about 8a on I-85 northbound near mile marker 158.   The driver was not hurt, but the cab and most of the trailer was destroyed.

Both lanes of I-85 northbound were blocked, backing traffic up for several miles.  By 10a, traffic was still at a standstill.

Motorists could be seen getting out of their vehicles and walking their dogs in the grassy median.

Further up the Interstate, at mile marker 172, another 18-wheeler jackknifed and ran up an embankment.  Traffic there was slowed, and there were only slight delays as crews worked to clear that wreck.