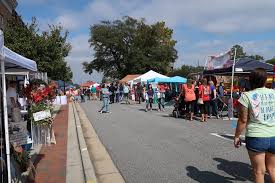 It is the City of Royston’s turn to celebrate the coming of fall with their annual fall festial this weekend.

The day-long event runs from 10a to 10p along Railroad and Bowers Streets in downtown Royston.

“We will have lots of arts and craft vendors, food vendors this year. A wide variety of vendors,” he said.

The Royston Fire Department will also be having a cake walk fund raiser at their fire house.

In addition, Crump said there will be lots of fun things for the kiddos to do as well.

Crump said during the day, entertainment will include a clogger dance group and a gospel dance group.

In the evening entertainment will be provided by the local group Legends of Destiny.

And of course no Royston Fall Festival is complete without the traditional fireworks to end the day.

Again, the Royston fall festival takes place Saturday from 10a to 10p in downtown Royston.

Wine, Cheese, and a Little Jazz

“A Journey To Jesus” Prayer Walk