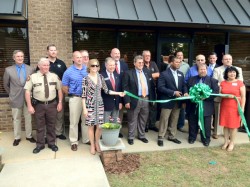 In Franklin Springs, a center that helps children who are victims of sexual abuse now has a new home.

Harmony House celebrated the opening of its new facility at 68 Spring Station Drive Thursday with an open house and ribbon cutting.

Harmony House is a member of the Children’s Advocacy Centers of Georgia and serves the five counties that make up the Northern Judicial Circuit.  They include Franklin, Hart, Elbert, Madison and Oglethorpe Counties.

Officials from all five counties, along with State Representative Alan Powell (R-Hartwell) and State Senator John Wilkinson (R-Toccoa), were on hand for the ribbon cutting Thursday.

Working with law enforcement and the district attorney’s office, Harmony House offers a safe place for children where they can be interviewed by counselors and examined by doctors.

The idea for Harmony House came some ten years ago from Hart County Sheriff Mike Cleveland after he attended a state law enforcement conference.  Cleveland said he saw a need in this area for a safe place for child victims of sexual abuse and neglect to get the care and attention they need.

“I felt sorry for anybody that has a problem with a child, whether it be sexual abuse, neglect, or whatever,” Cleveland said. “Even with the best that we can do with an interview, it’s still an interview, and when it’s in the surroundings of a hospital or just a cold setting, then that child has been traumatized twice.”

With brightly colored walls, toys, games and soft blankets and furniture, Cleveland said Harmony House provides a home-like atmosphere for children where they can feel safe and comfortable.

Since it opened, the non-profit facility has been housed in a number of places, but District Attorney Parks White called the new center opened Thursday, better than anything he’s seen in larger cities.

“I come from Augusta, which is a much larger area,” White said. “The quality of the services you perform at the older facility I visited during my campaign was better than the one in Augusta. And this one is just amazing. It’s truly a treasure.”

State Representative Alan Powell credited the people in the five county judicial circuit with seeing a need and filling it.

“People stepped to the plate,” he told the crowd. “They were very active and saw the necessity in it. They saw the day where police in this area had to be specialized with caring and compassion.”

In addition to providing services for children of sexual abuse, Harmony House now also offers services for adult victims of rape and other sexual assault crimes.