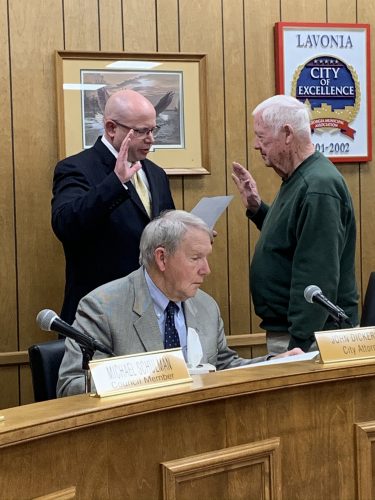 Michael Schulman is sworn in by Mayor Ralph Owens

A new Lavonia City Council member is sworn in and another takes his leave after more than a decade of service.

A former Captain with the Lavonia Police Department, Schulman is filling the unexpired term of former councilman Courtney Umbehant who was recently elected Lavonia’s new mayor.

The City council and Mayor Owens also recognized City Councilman Harold Harbin, who is leaving office after serving on the council for 12 years.

f”We present this to you Harold in recognition of your 12 years of faithful and dedicated service to the City of Lavonia, 2008 – 2019. I’ve enjoyed working with you,” Owens said. 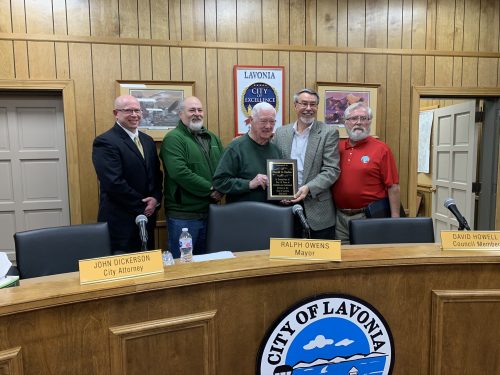 Not only was this Harbin’s last official City Council meeting, it was also Mayor Owen’s.

Councilman Eddie Floyd told Harbin and Mayor Owens he appreciated the help both had given him over the years.

“I just want to say how much I appreciate you guys for what you all have done and how you’ve helped me through my career as a councilman, what you’ve done for the City. Thank you, Harold. Thank you Mayor,” he said.

For his part, Harbin exhorted the incoming councilmen and new Mayor to look to the interests of the ctizens of Lavonia.

“My only advice would be for you to do what you think is right and just think about the people that you serve in every decision. Really study it and decide what to do, but make sure it’s to benefit the people of Lavonia,” he told the Council.

Harbin lost his bid for the mayor’s seat to Courtney Umbehant.  His city council seat is being filled by Andrew Murphy.

As his final duty as Mayor, Owens will administer the oath of office to Murphy and Umbehant at the January meeting.