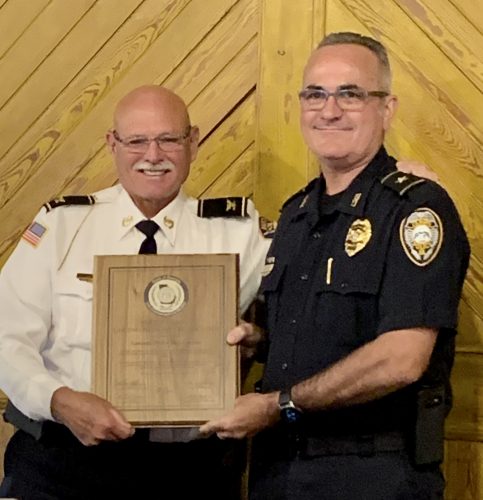 For the fifth time in 19 years, the Lavonia Police Department has received its certification from the Georgia Association of Chiefs of Police.

A special dinner was held Monday night to celebrate an achievement only a fraction of Georgia police departments statewide have achieved.

At the dinner, Monday, Georgia Association of Chiefs of Police president Bruce Hedley commended the Lavonia Police Department for their hard work and high standards.

Hedley, who also serves as the Lilburn Chief of Police, noted Lavonia PD is the only department state certified in the five-county area.

“This is not a process where you pay the Association $375 and you get a plaque in the mail,” he said. “This is a process sometimes years to achieve. Some people never achieve it. So that might give you a glimpse about how rugged the standards really are and the process is tough…Up in this area is the Northern Judicial Circuit. It’s a five-county area. It’s massive. We’re talking about Franklin, Hart, Madison, Oglethorpe, and Elbert counties. And out of that massive region of (police) departments, there’s only one certified police department. And that’s Lavonia. That’s something to be very proud of.”

Noting the demands recently by those calling for greater reforms in law enforcement, Carlisle said many of those demands are already required for certification and are part of his department’s standard of conduct.

One in particular is a method for knowing when officers are using too much force on a suspect.

“All the things you see on the news and all the demands people are making in their peaceful protests, we’re already doing it. We’ve been doing it. There’s a standard called an early warning system. There are triggers when officers are beginning to go bad. You look at use of forces and their patterns of sick leave and things like that. Those things are already there. We just implemented a duty to intervene when an officer is doing something they’re not supposed to be doing,” Carlisle explained.

Chief Carlisle said this is his last certification before his retirement in 2023. 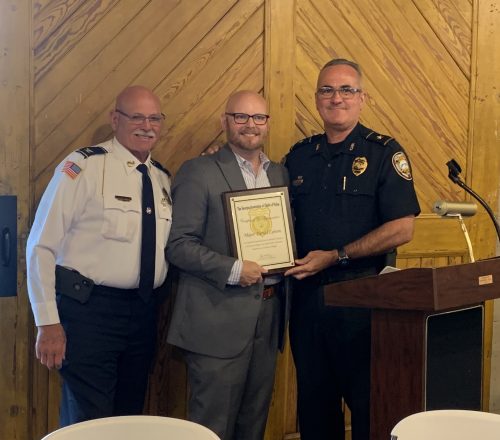 Also receiving an award Monday evening was Major Daniel Carson, who headed up the assessments required for certification.

In order to be awarded certification, police departments must meet 127 high standards in various areas of operation.

According to their Web site, Certification is a progressive and time-proven way of helping law enforcement agencies calculate and improve their overall performances.

Participating agencies conduct a thorough self-analysis to determine how existing operations can be adapted to meet these objectives.

When the procedures are in place, a team of trained assessors verifies that applicable standards have been successfully implemented.

The process culminates with a decision by a joint executive committee that the agency has met the requirements for certification.

Certifications are awarded every three years.