Last Week to Advance Vote Prior to November General Election 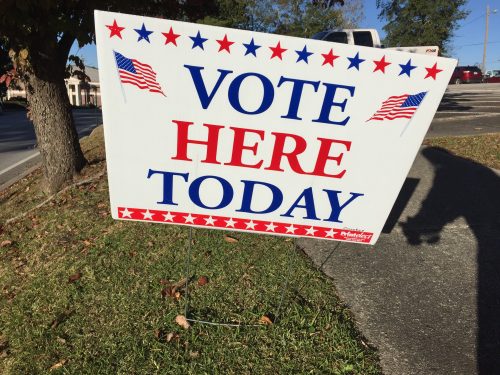 It is the third and final week of early voting for the November 3 General Election and voters continue to pour out in large numbers to cast their votes – both in-person and by absentee ballot.

In Hart County as of Friday, Elections Supervisor Robin Webb tells WLHR News over 4,000 voters have cast in-person early ballots, and just over 2,000 absentee ballots have been returned.

Webb said while there have been fairly long lines at times, most voters going to the Hart County Public Library have not had to wait more than 15-20 minutes.

“It has been running very smoothly this week. Our lines are not long. We will be opening up a second room for next week and adding more machines so there will be even more units available for voters and more room,” she said last Thursday.

In Franklin County, Elections Supervisor Gina Kesler said they’ve had over 3,000 in-person voters as of Friday and so far, there have been no long lines.

At the end of the day last Wednesday, Kesler’s office had accepted 1,501 absentee-by-mail ballots and had had 3,119 people vote in person as of Thursday.

“We’re still getting a lot of calls wanting to know where to vote and how long our wait times are. It literally takes you five minutes from start to finish,” she said.

In Franklin County, you can vote early at the old Carnesville Elementary School on Hull St. in Carnesville.

If you still need an absentee ballot, there is still time to request one by calling your local registrar or Elections Supervisor to request one or by going online to the Secretary of State’s website at sos.ga.gov.

In Stephens County, Registrar Eureka Gober is advising those submitting absentee ballots to hand-deliver them to her office before November 3.

Gober said she has already had a number of absentee ballots sent via the US Postal Service take longer than expected to arrive.

Absentee ballots must be returned to your local Board of Elections or Registrar’s office by 7p Tuesday, November 3.