Laney talks about the serious issue of underage drinking

Submitted by Susan Poole  For those who missed it, the June Lunch and Learn hosted by the Lavonia Chamber of Commerce addressed the very serious topics of teenage drinking and rise in suicide. The program, presented by HEARTS for Families’ chief executive officer Sue Laney, was offered to inform adults who work closely with children about the dangers of underage drinking. 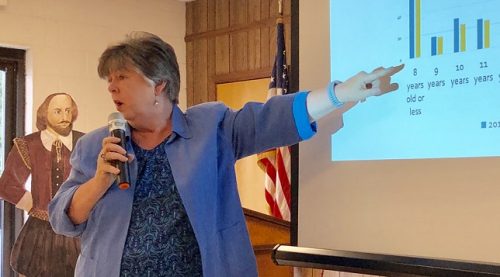 The average age for a child in Georgia to have a first drink of alcohol is 12.3 years according to a Georgia Student Health survey conducted for the 2018-19 school year.

Laney said the good news is that 88.7% of middle school students had not had a drink of alcohol in the 30 days prior to the survey.. The 11.3% of children aged 12 to 15 who admit to drinking alcohol are 50% more likely to become alcohol-dependent adults.

Suicide and underage drinking are related, Laney pointed out. Suicide is an escalating public health problem and alcohol use has consistently been implicated in the precipitation of suicidal behavior.

Eighteen percent of students in the survey admitted to thinking about suicide attributed to pressures such as schoolwork, grades, discipline problems, peer pressure, social media, family issues, being bullied and relationships with girl or boy friends.

Drinking alcohol damages the teenage brain, Laney said, by affecting parts of the brain which have not yet finished developing. Two or three drinks a day, or drinking three times a week stops brain development at that stage.

Although parents resist being told how to raise their child, it is important for them to become aware that children are drinking with friends in cars, in other homes, and sometimes at school according to survey responses. Laney urged families to lock up alcohol kept at home, monitor the amount on hand and not provide alcohol to other children.

Lavonia City Manager Charles Cawthon will be the guest speaker at the July 25 Lunch and Learn. The public is invited and the meeting will be at noon at the Lavonia Depot. Cawthon will address the present and future plans for the City.

Reservations for the complimentary luncheon should be made by calling 706-356-8202 by July 18.

FCP Auditions for “A Journey of Hope”