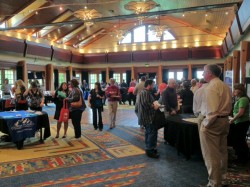 Some job seekers may soon find themselves collecting a paycheck instead of unemployment after Monday’s Hart County Career Expo.

With the unemployment rate still in the double digits in most of Northeast Georgia, hundreds of people looking for work came from around Northeast Georgia and the Upstate Monday to Cateechee Golf Club in Hartwell, resumes in hand, hoping to land a job with one of the more than 20 employers represented.

One of those job seekers was Claudia Goltermine.

Up until January, Goltermine owned her own business in Hartwell. Now, she’s just struggling to get by. She said Monday she was looking for anything that would bring in a paycheck.

“I owned the Curves in Hartwell, but I had to close it. Now I’m just struggling to get by,” Goltermine said. “I’m having to live on my savings, which I didn’t want to do.”

However, now in her late 50’s, Goltermine admitted finding a job at her age is tougher than she thought.

“I’ll take anything. I’ve had business experience, including retail from bottom to top. I could fit in anywhere.”

Sponsored by the Hart County Industrial Building Authority and the Toccoa Career Center, about 25 employers were on hand ready to interview and hire.

“We’ve had a lot of good customers coming through, dressed nice with resumes and ready to go to work,” said Career Center Director Kathy Smith. 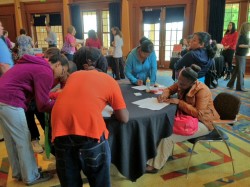 Smith said most employers who were hiring were looking for people with technical experience and production experience.

One of those companies was Westwind Inc. of Anderson, SC which owns a number of Burger King restaurants in Northeast Georgia and the Upstate.

District Supervisor Debbie Smith said they were looking to fill a number of positions Monday.

“We’re looking for everything from team members, to shift managers, to general managers,” she said. “We need people with a great attitude who are hard working.”

With a starting salary of $35,000, Ashe said they had a lot of people stopping by to find out how to apply.

“We’re recruiting full-time for police officers and dispatchers,” he said. “We have a lot of applications, but we have a very select few who can make it through the process. We’ve had a lot of interest but we require you go online to make your application.”

Doors opened at 10a Monday for the Career Expo and by 10:30a, over 150 people were filling out applications and talking to employers.

“We had people here at 8:30a waiting in line to get in,” said Hart County Industrial Building Authority Director Dwayne Dye. “This has been a really great turnout.”

Smith said they plan to hold another Career Expo in the fall.

“Art by Hand” Exhibit at the Hartwell Art Center