The Hart County Board of Education received a request from Billy Kidd in April requesting the board name the basketball court at the Health and Wellness Center after coaches Bill Ensley and Eddie McCurley. 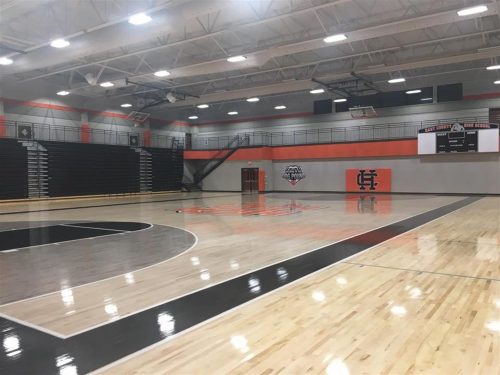 Kidd said by naming the court after both coaches, it connected the two eras of Hart County basketball as well as honors and recognizes the significant accomplishments of each one.

Board Chair Kim Pierce introduced the measure at the May meeting.

“The first item is to name the basketball court. If you all remember, at last month’s meeting we had a request from Mr. Billy Kidd to name the actual court in honor of Coach Ensley and Coach McCurley. We decided to put that out for public comment. Does anyone have any public comment?” asked Pierce.

Superintendent Jay Floyd said he had received a few comments and that all were positive.

“Any comments that I have received have been 100 percent positive. We did put this information on the website and a place on the website where you could make comments anonymously. We did make that available, plus you could call, but the comments have been positive from my standpoint. I do want to clarify too, there were some comments about naming the Health and Wellness Center, but this is not what that is about. This is about naming the court Ensley/McCurley Court. What that would entail is putting a logo on the actual court and naming it. I just wanted to be sure I clarified that,” said Floyd.

A suggestion was also made to name the old gym after the two coaches as well.

The board then voted unanimously (with the exception of Board Member Lonnie Robinson, who was absent) to move forward with naming the court after the two legendary coaches.

Coach Ensley led the Bulldogs and Lady Bulldogs from 1958-1970, acquiring a record of 448-91. He won AA state championships in 1963 with both the boys and girls teams, two state runner-up honors, two third place finishes and one fourth place finish.