Hart-Franklin Airport Authority Chairman Eddie Addison appeared before Hart County Commissioners on Tuesday to bring a report on the authorities activities. Addison began by listing the current members of the authority and their affiliation. 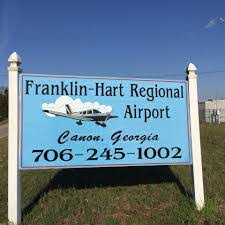 Addison then listed a number of improvements recently made at the airport including the parallel taxiway, new hangers, new runway lighting, a new automated weather system, new fencing and the runway extension project, which was completed a few years ago.

Addison then told commissioners the current authority was working on a budget as well as looking for possible grants for more airport updates and projects.

“There’s a lot of money out there right now from the feds and a lot of projects. The feds pick up about 90 percent and there’s a 10 percent split between GDOT (Georgia Department of Transportation) and the local government, which is about five percent. Tehre’s a lot of things out there. As we develop our strategy we will be coming back to you guys, of course with a budget, and we will also be talking about projects that we have on the dashboard,” said Addison.

Chairman Joey Dorsey then told those gathered the airport was a major part of the county’s economic development, and why.

“One thing that most people don’t realize is why this airport is so critical to us from an economic development standpoint. Years ago, when we brought in economic development clients, we had to bring them in through Anderson County at the Anderson Airport. They would get to see Anderson County at Hart County and Franklin County’s expense. Now we’re able to bring them in through the Hart-Franklin Airport. They get to see both counties and they do not get that free preview of a neighboring county who is competing with us. It’s a very key part of our economic development activities and I just wanted you to know this,” said Dorsey.