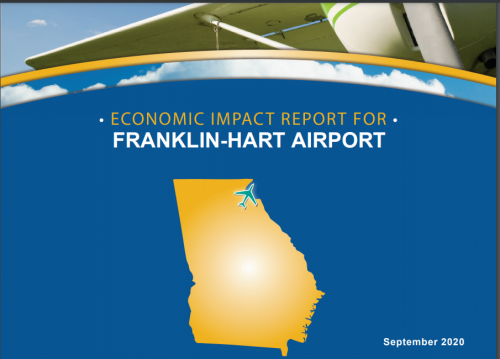 The Georgia Department of Transportation has released a Statewide Airport Economic Impact Study that quantifies the economic impact of the state’s 103 publicly-owned, public-use airports.

The study determined that airports contribute $73.7 billion in annual economic benefit to the state, and support 450,500 jobs with a total annual payroll estimated at $20 billion.

Since statewide economic impacts from Georgia’s public airports were last measured in 2011, the total annual economic impact has increased by $11.4 billion or 18 percent – from $62.6 billion to almost $74 billion.

The study reflects a year-long effort to investigate, study, and document the economic impact of commercial and general aviation airports in Georgia.

Information in the study is intended to help the public understand the importance of each local airport and the role it plays in supporting the economy of the state.

According to the report for the Franklin-Hart County Airport, the airport accommodates general aviation-related activities including recreational flying and agricultural spraying and has one business tenant, Barnstorm America, that provides bi-plane rides and flight training.

It was also noted in the report, that the airport’s primary visitors are business-related and has an estimated total visitors of 2,826 annually.

It was also noted that the Franklin-Hart County Airport was the first grant recipient from the One Georgia Authority’s AIRGeorgia Program in 2007.

The report concluded the airport has proven to be a valuable asset for prospective
businesses and industries considering locating in the area.  View the entire report for the Franklin-Hart County Airport Here

Bowersville Drive Thru Trick or Treat