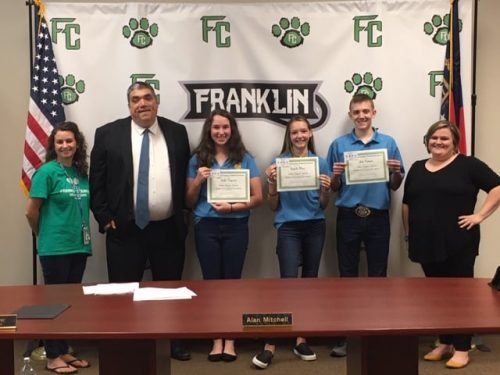 Brown said the recognition was based on a number of their FFA activities over the past year.

Recently, the Middle School FFA made a video, which was submitted to the National FFA committee that will determine the National winner.

According to Brown the announcement of who will be named the number one FFA Middle School Program in the country will be made at the end of October and will be live-streamed.

She details on how to view the event will be given out later.

Brown thanked the Community and Board of Education for all their support over the past year that helped them win the national recognition.

Each of the Middle School officers 8th grader and FFA president Isabella Moon, 8th grader, vice-president Hallie Ferguson, and 8th grader and Secretary Jake Parham received a Certificate of Achievement from the School and a free Chick-Fil-A sandwich.