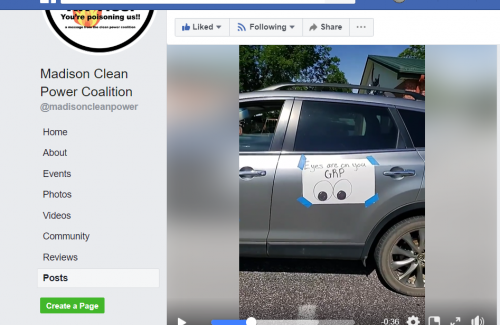 The bill that bans statewide the burning of creosote coated railroad ties at biomass plants for power generation, passed unanimously in the State Senate last week.

Governor Brian Kemp has 10 days to sign the bill into law, but even if he doesn’t, it still becomes law.

Members and concerned citizens gathered at the Colbert United Methodist Church where they put signs on their cars letting the company know they are not going away and are continuing to monitor GRP’s activities.

In videos posted on their Facebook page, MCPC member Gina Ward showed container loads of railroad ties were still coming to the Madison County plant and were blocking the roadway in front of the plant.

“We can’t go anywhere because the road is blocked by railroad cars filled with railroad ties,” Ward said. “They’re bringing in railroad ties and they’re still chipping away.”

State Representative Alan Powell who co-authored HB857 said last week that if GRP does not stop burning railroad ties, they will be fined by the Georgia Environmental Protection Division and shut down.