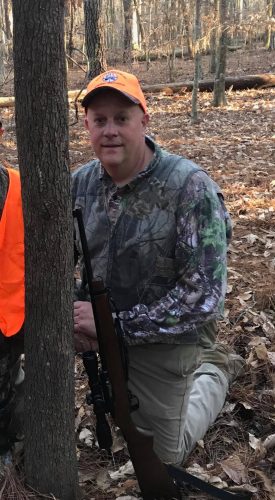 A Danielsville man will spend 10 years in prison after pleading guilty to vehicular homicide in the 2020 death of DNR Captain Stan Elrod.

White said Elrod was hit from behind and killed instantly.

Elrod was struck by Hamons while on Hunt Road in Danielsville on Thursday, Sept 4, 2020 in while physically training.

According to the Georgia State Patrol, Hamons failed to maintain his lane and struck Elrod on the southbound side near the shoulder.

Hamons was arrested at the scene.

A native of Toccoa, Elrod had been with the Georgia DNR for 28 years, and lived with his family in Danielsville.

Among his many accomplishments, Elrod was a board member of the Outdoor Dream Foundation.

He was a cyclist and participated in the Police Unity Tour and was a founding member of the DNR Honor Guard.

In March of this year, he was posthumously awarded the Guy Bradley Award by the National Fish & Wildlife Foundation for his lifetime contributions to wildlife law enforcement, positive impact on the community and the state, selfless devotion to others, and outstanding leadership.

Before sentencing, Online Athens reports Hamons’ attorney Jim Smith of Athens suggested a five-year prison term, saying Hamons has accepted responsibility for his action, has no criminal record, was employed at an auto repair shop, and after the crash called 911 and attempted to render aid to Elrod.

Upon his release, Hamons must perform 100 hours of community service by speaking to various groups about how seconds can change your life.