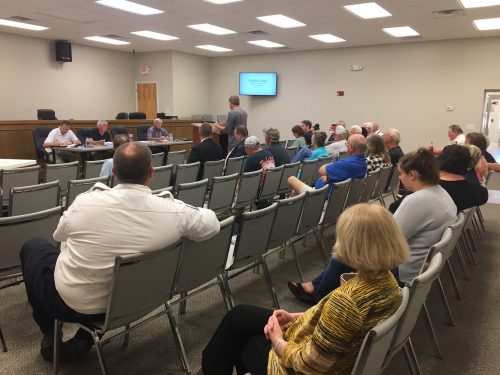 At their work session Tuesday night, the two members of the Board and Commission Chair Thomas Bridges heard from irate citizens who said something must be done about the noise, stench, and soot.

Mark Blalock lives .7 miles from the plant on Highway 198, which is scheduled to be in full operation in October.

Blalock said the noise is constant and the decibel range is enough to damage one’s hearing and in violation of OSHA regulations.

“The NEOSHO, which is a subsidiary of OSHA says anything above 85 decibels is damaging our hearing,” he said. “So the noise we’re hearing out there are reaching the area of 190 decibels. NEOSHO requires an employer if they go above 85 decibels, to have hearing protection. A person cannot work in that type of environment without hearing protection. We’re living in it because we’re all neighbors.”

Blalock also cited the problem of soot ash falling on neighboring properties, but said there is a solution for that.

“They make a device that attaches to the smoke stacks and works like a catalytic converter,” he said. “This is taking that soot and reburning it and putting it back into the burners so everything that comes out is crystal clear air. So that’s something that I believe from our talks that we’re looking for.”

Other issues brought up by Blalock is ground and water contamination, which he said also have remedies.

Jerry Wilson is another resident who lives near the biofuel plant on Whipporwill Lane.

Wilson told the Commissioners representatives from Georgia Renewable Power need to meet with residents in the near future.

“I would like to ask you to ask GRP to come to talk to us because we haven’t heard anything from them,” she said. “I would also like to tell you that my acre of organic blueberries have been covered in smut and black smoke the last two days and it’s disgusting.”

Others told Commissioners their property values have dropped because of the biofuel plant and they want the Company or the County to buy them so they can move somewhere else.

Afterwards, Both Commission Chair Bridges and County Manager Beth Thomas said they will work on the issues presented and try to arrange a public meeting with Company officials.