City of Lavonia Candidates Open Up on the Issues Concerning Voters 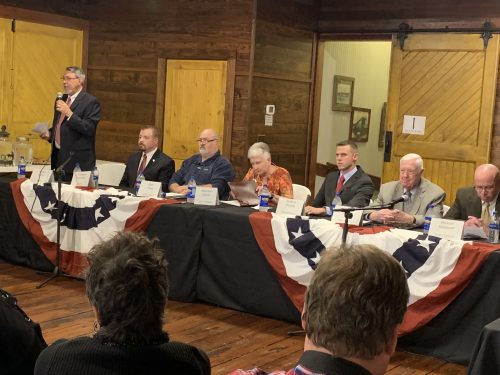 Some Lavonia citizens now have a better view of the platforms candidates running for City offices are campaigning on.

Over a hundred interested voters attended a Town Hall political forum at the Historic Train Depot in Lavonia Thursday evening.

Top issues for voters and candidates alike included expanded housing options, improved city parks, the continued renovation of the downtown area, and making sure downtown Lavonia does not become a ghost town once the new 17 Bypass is built.

In answering what is the most important issue facing Lavonia citizens, all of them answered having enough housing is vital to continued economic growth.

Courtney Umbehant said a variety of housing is needed.

“Certainly we need more housing. We need workforce housing to come here. We need middle-class apartments and things of that nature. Housing is a big issue that we have. We want more industry to come to our area. The only way to attract more industry than what we have right now is by having a workforce to work there,” he said.

Andrew Murphy who is running for the Post 4 seat against current Mayor Ralph Owens, pointed out young people prefer living intown and more options for them is also needed.

“Something else we need to look at is building more housing in the downtown area,” Young said. “People in my generation want to live in the center of town in a loft apartment or townhome. They don’t want to cut grass, they want to come home, walk downtown to eat, come home, watch TV and go to work the next day. If you have housing downtown, it’s going to help the downtown area thrive more. That’s something we need to look at too.”
Mayor Ralph Owens noted that the City is already working with a certain developer to build more housing.

“We’re working on those things. We’re working with a developer to build senior apartments next to St. Mary’s hospital and near the high school,” Owens said. “Right now there’s a gentlemen building about five or six houses.”

As for improving the downtown area, mayoral candidate Harold Harbin said the City could do more to force building owners to make improvements.

“One out of every four store fronts is closed. And I think we really do some work down there to bring merchants in again,” Harbin said. “Some of our buildings have deteriorated and  we really need to enforce some codes. All those things we have the tools to do that with. The City has capabiltiy of purchasing buildings downtown, refurbishing those buildings and then offering them to merchants who want to come in. We can set the rate.”

In addressing the new Bypass concerns, Floyd said it’s important to make the downtown area attractive to people passing through.

“If people have a reason to be here, they will be here. There’s plenty of people go up and 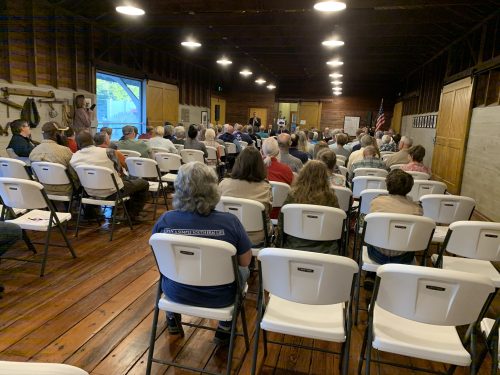 down Highway 17 everyday that have no reason to be in Lavonia, they’re just passing through,” Floyd said. “Those are the people we want to go around. And some of those people who are passing Lavonia, we want them to say, ‘Hey, let’s go and check this little town out.’ So, we need to put some kind of signage out there (on new bypass). We need to have some kind of draw that will pull those people here. It’s a destination, not just a place.”

Floyd’s challenger Mary Lou Jackson said the City needs to have a plan.

“Back when I was on the Council, it was A City With a Future,” she said. “Well, the future is now. We have to plan. We need to support the people that have stores downtown. It’s hard to have traffic through that doesn’t stop. We need to put signs out that will attract people, that will make them say, ‘Oh look, there’s a little store, we need to go check that out.'”

The Town Hall Forum was sponsored by the Lavonia Chamber of Commerce.

A video of the entire Town Hall forum can be viewed on the Lavonia Chamber’s Facebook page.