Citizens Clamor for Action From County on Tainted Creek Water 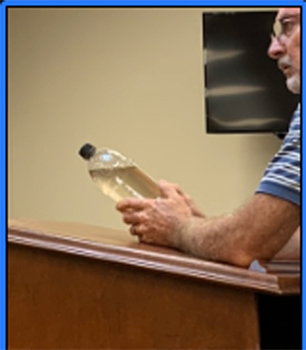 Franklin County Commissioners say they will wait to hear from agents with the Georgia Environmental Protection Division and the Department of Natural Resources before moving forward with any attempt to stop a bio fuel plant from operation.

On Saturday, run off coming from the GRP Franklin Renewable Energy plant at 3465 Highway 198 in Carnesville ran into the creek, killing the fish and producing a stench.

Maddox said that Burgess found employees at the plant were using what he called water cannons to put out fires inside huge piles of decaying wood chips.

Maddox He said the amount of water they used was so great it overflowed the plant’s retention ponds causing contaminated water to flow into Indian Creek.

On Tuesday, WLHR News spoke with Kevin Chambers, Communications program manager for the EPD along with Jim Cooley, District Manager for the Mountains Region District.

Cooley said the DNR has a fisheries biologist taking samples at Indian Creek and they are working with GRP to put out the fires in the wood chip piles.

Monday night’s Franklin County Commission meeting was again packed with irate citizens living near the plant who now say not only is Indian Creek contaminated, but their well water is also likely tainted.

Sheila Baker lives on Culpepper Road and told the Board Indian Creek runs through her property.

Baker questioned whether the County ever did any background checks on the company before approving their operation.

“My question to the Board is that when they applied to put that plant in, did you have anybody investigate the two companies that run that plant; had they ever had EPD/EPA violations, had they ever been sued or had formal complaints brought against them ….because we were told they would just be burning wood chips and now they’re burning creosoted railroad ties,” Baker asked.

Mark Gibson brought a jar filled with water from Indian Creek after the contamination.

The water had a yellowish brown tint with a black substance floating on top.

Gibson said Maddox told him Saturday that GRP has been cited for environmental violations in the past at other plants they operate.

Gibson said he cows used to drink out of Indian Creek but won’t now because of the polluted water.

Ken Davis also lives on Culpepper Road and said he now fears his well water will become tainted because of the run-off.

“It’s just a string of frustrations. We count on you guys to be our voice. We have noise issues, we have soot on everything and now the creek has been poisoned. I don’t have cows that drink out of the creek, but I have grandchildren who drink out of our well. And I don’t how I’ll ever have confidence that I can drink the water again. My water is darker than yours. The creek where I am is much darker than that,” Davis said.

Others attending threatened to stop paying their property taxes and find an attorney to get an injunction to stop the GRP plant from operating.

Commissioners Eddie West and Jason Macomson said they were very troubled by the alleged environmental hazards and told the citizens they will continue to look into the county’s options after they get the reports from the EPD and the DNR.