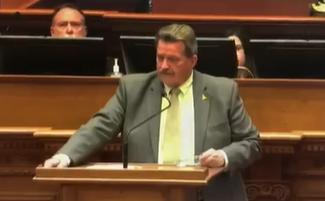 On Thursday, Crossover Day in the Georgia General Assembly, the House unanimously passed HB857 that bans the burning at biomass plants in the state from burning creosote-coated railroad ties in the production of power to sell to power companies.

When Rep. Alan Powell dropped HB857 last this month, he told WLHR News he hopes the bill, if passed, will force GRP to honor their original business plan.

“After meeting with the EPD and the citizens in Carnesville last Sunday, it struck me that those plants made a commitment in 2015. The federal government didn’t allow the burning of creosote-treated wood until 2016, and that’s when they jumped into it. So, if we ban creosote they can’t say that it would alter their original business model of burning clean wood by-products.”

While in Committee an amendment was added that would allow Governor Brian Kemp to immediately sign the bill into law rather than wait until July 1 when most bills that he signs become law.

Citizens living around both Georgia Renewable Power plants in Carnesville and Comer have been complaining for months about the noise, stench, ash, and water contamination coming from the facilities as a result of the burning railroad ties.

Company officials have blamed the noise on start-up testing before the plants officially went into operation.

Last fall, piles of creosote-coated wood chips at the Carnesville plant caught fire. Employees using water cannons tried to put the fires out. That caused contaminated water to overflow their holding tanks and run into Indian Creek, killing the fish.

Cattle farmers who depend on the creek for their livestock said the water became undrinkable as a result of the contamination.

In December, the Franklin County Board of Commissioners called on GRP to honor its 2015 promise to burn only “clean wood products” to produce fuel.

But in 2016, the EPA lifted the ban on burning creosote-coated wood ties.

However, both the EPA and the EPD have limits to the number of railroad ties biomass plants can burn.

The EPA limits it to 40% a year and the EPD set an even tougher standard at just 20%.

According to the RailstoTrails Conservancy Web site, railroad ties can be coated with a number of different chemicals that are hazardous to the environment and groundwater. (https://www.railstotrails.org/build-trails/trail-building-toolbox/acquisition/environmental-contaminants/)

One is creosote, which is an insecticide, sporicide, miticide, and fungicide that penetrates deeply into pressure-treated wood for a long time.

The Conservancy said on their web site that if the railroad ties are old, creosote may ooze out, leeching into the soil and killing plants, insects, and small animals. Creosote also pollutes the local watershed and can be dangerous to health with prolonged or frequent contact.

Another chemical they said is used to treat railroad ties is chromate copper arsenate or CCA, which appears green, but can be even more dangerous to the environment than creosote.

“CCA protects against rotting with chromium, copper, and arsenic, and it is a common alternative to creosote for treating railroad ties. The arsenic in the wood is toxic, making it a danger to plants and wildlife that have prolonged contact with it,” the Web site said.

WLHR News has no indication or confirmation that either GRP plant is burning cross ties coated in CCA.

Franklin County Commissioner Eddie Wester pointed out the County has no way of knowing if GRP is honoring the EPD’s 20% rule.

In January, the Franklin County Board of Commissioners voted to ban any future biomass plants or plants that burn creosote wood from locating in the County. However, Powell noted local governments have no authority to pass such bans, it must be done at the State level. That’s why he and Wilkinson submitted their respective bills.

Senator Frank Ginn told a House Committee the plant in Madison County is generating $4.7 million a year in tax revenue. But he said it must be operated responsibly.