With Mayor David Jordan out of town on vacation, Mayor Pro-Tem Keith Turman presided over the May meeting of the Royston City Council after council members voted to give Turman all of the duties and responsibilities of the position until the mayor’s return. 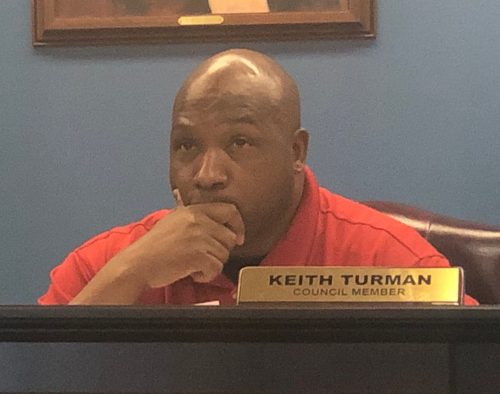 come up with clearer guidelines and new fee schedules for white goods pickup in the city.

Andrews said the policy needed clearer guidelines, including accurate descriptions of what white goods were and what could be picked up by the city. Edwards said white goods would fall into three categories.

“One, or Category A, being those worn-out couches. That needs to be one category or product line. Number two, or Category B, would be recyclables goods. We actually have a recycling center that our community can actually get to, but there are some circumstances where we’re called and asked to remove them. We would charge a fee for that. Then category C, which would be “we do not touch it.” It could be an EPA issue or something hazardous. We do have that in an ordinance- tires, batteries, acid materials or petroleum products, we do not take,” said Andrews.

Acting Mayor Turman told Andrews a process was put into place a number of years ago.

“I know when we first started discussing a good many years ago we had a process in place where we would come out during the week on a designated day where you could pay and we could define what was going to be picked up and once we do that, they go out on a Friday of whatever day of the week so our truck was not riding around all over town looking for white goods,” said Turman.

Councilman Lee Strickland also said the city had a policy and pricing in place.

“I remember when we started this, I forget when it was, but there was a per item or a 5×5 space, anyway, it was a per item or per space fee because we dealt with renters leaving and then homeowners having it and piling it on the street. At that time we used to pick up white goods like every other week free, at no charge,’ said Strickland.

Andrews restated his position, telling council members the policy needed to be clearer and fees needed to be appropriate regarding what was being picked up.

Turman asked Andrews if he could have something ready by the July meeting and the city manager told him he would.