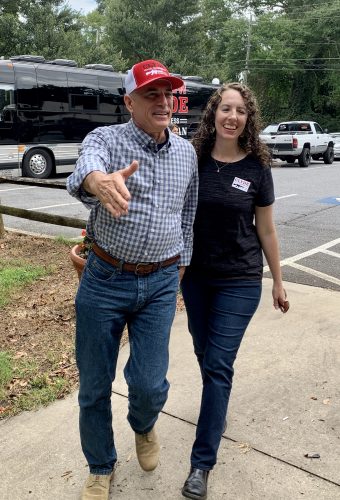 Republican candidate for the U.S. House District 9 seat Andrew Clyde made a stop in Carnesville Thursday to thank law enforcement and safety personnel for their service.

Clyde has been touring the 13-county 9th district all this week and says it’s important we remember the hard and dangerous work our law enforcement does to protect us.

“I think we see too much in the news media right now of a lack of support for our law enforcement,” he said. “They’re the ones who make sure citizens and our communities stay safe. When they are denigrated and vilified, that’s wrong. We need to encourage them. We need to lift them up.”

Clyde referred to some cities across the Country such as Minneapolis that is considering dismantling its police forces after the death of George Floyd who died while officers were trying to make an arrest.

Clyde said law enforcement is being sacrificed on the altar of political gain.

“When political leaders turn their backs on them and prosecute them for things that are not prosecutable offenses for political gain – that’s wrong. That’s what this bus tour is about. We’re going to every county in the 9th Congressional District and we want all the law enforcement to know that we support them and we have their back,” he said.

Yesterday Clyde visited Carnesville, Hartwell, and Toccoa, spending time with voters and listening to their opinions. 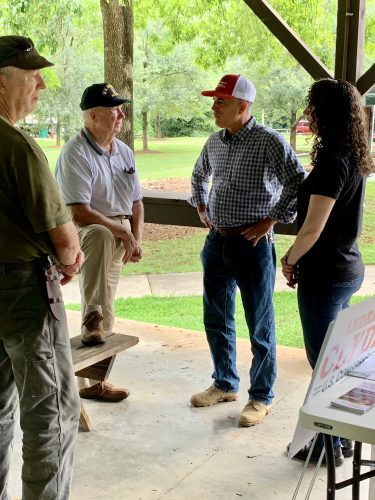 He said people are angry and upset with plans in communities, such as Athens-Clarke County where there’s a move by one county commissioner to cut the police department in half and replace it with social and mental health workers.

Clyde said he disagrees with what Athens-Clarke County is attempting to do and he said the citizens there also disagree with it.

“We’re hearing that it doesn’t make sense, that it’s not logical, it’s not smart, it’s not the right thing to do,” Clyde said. “Protect and serve is the motto of law enforcement. And that’s what they’re there to do and that’s what they do. If there’s one that does something that’s not right, then you deal with that one individual but don’t paint all of them with the same brush that they’ve all done something wrong when they haven’t.”

Clyde, a businessman from Jackson County, and retired Navy veteran is running against State Representative Matt Gurtler in the August 11th run-off.