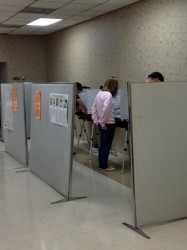 Early voting for the 2019 November elections continues this week, but so far turnout has been very low in Franklin County, according to Elections Supervisor Gina Kesler.

If you live in Carnesville, Canon, Franklin Springs or Lavonia, you will cast your early ballot at the Board of Elections and Regisrations office in Carnesville through November 1.

City of Royston voters can go to Royston City Hall to cast their early votes.

As of late last week, Kesler said only 17 people in Franklin County had opted to advance vote.

About half she said were from Lavonia and half from Carnesville.  No one from Canon has come to vote early, according to Kesler.

No word from Royston on how many have cast early ballots there.

If you haven’t voted in the past couple of elections, you may have been taken off the voter rolls.  So, Kesler says you should check with her or your county registrar to see if you are still on the voter rolls.

“They can log into the MyVoter page and put in the information and check it online,” Kesler said. “Or they can call our office and we can confirm if they are or are not registered to vote. The deadline to register to vote for this election was October 7th,” she said.

That means if you had not registered by that October 7 deadline, you can still register to vote, but you will not be able to vote until the November 2020.

Now if you registered to vote before the deadline, but received a notice in the mail from your registrar’s office, your registration is in “pending” status, Kesler said you can still cast a ballot.

“Voters that are in pending status may still vote as a provisional ballot. They then have three days to provide our office the proper documentation, whether it’s a citizenship issue or whatever is causing them to be on pending status,” she said.

Absentee ballots are now going out as well.

You can call your local Elections and Registration office and ask for an application to be mailed to you through November 1st.